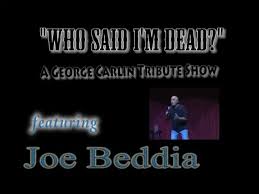 Who Said I’m Dead," a tribute to the late great comedian George Carlin featuring Joe Beddia comes at you hard, fast, and so authentic, audiences all over feel as if George himself took “a day off from heaven” to join us once again. This award winning look-and-sound-alike presentation will leave you feeling the true “SPIRIT” of the man, the genius...George Carlin.  Since it’s debut in 2009, this show has been dazzling audiences wherever it plays.

Five years in the making, Joe was a major fan of the man, and he felt that there was no better way to honor him than to bring his words back to the stage, in hopes of introducing his work to a whole new generation.

Audiences all over the country have experienced the Show, and have had rave reviews for it. Most folks tell us that it was  better than they were expecting.

Joe Beddia is an accomplished actor, musician, and singer. He is well known for his Godfather Show, where he hosts as Marlon Brando, and performs a variety of songs and Celebrity impressions.